Concert and Workshop with Franco Morone 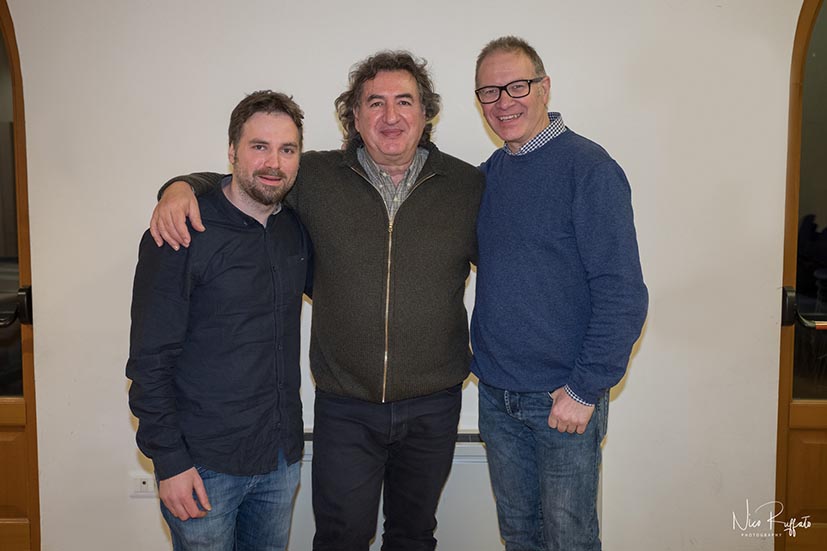 Saturday, March 3, we managed to get to Camposampiero (Pd). The heavy snow of the past days and the closure of the highway the day before the departure had worried us… but everything went well.
At our arrival, the organizers Michele Lideo and Nico Ruffato of the Spazio Acustico School and Accademia Filarmonica, were already there to welcome us. 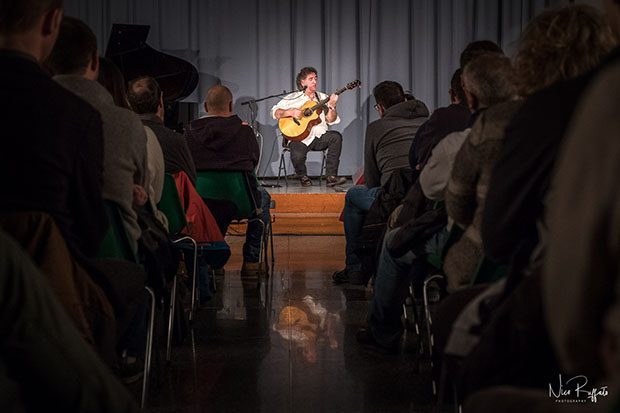 It was a wonderful opportunity to meet up with longtime friends like Vittorio from Bolzano, Francesco from Roncade and Francesco from Verona, who had just returned from India that day, and my cousin Dino Larry, whom it was nice to see again after such a long time.
The concert hall was packed. Franco was at ease on stage. It was a bit like being with family.
The concert started with the repertoire of the CD Miles of Blues, with blues soundscapes inspired largely by the experiences gained from travelling.
In the second part, Franco took us virtually into our local folk with “Calderai-Bigordino-Giga“, and international folk with “Samiotisa” a Greek song in 7/8 and some Irish songs of great charm.
Then some new songs like “Dangerous Roads“, in homage to the magical way of Michael Edges playing, “Sunny Side of Mind” and “Song for You to Stay” are two beautiful songs now published in the new CD solo Strings of Heart. 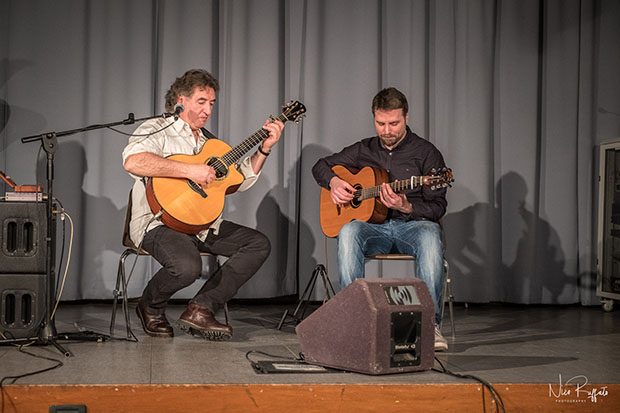 Very nice also the second part with the participation of Michele Lideo, who played with Franco the “Le Meglio Storie con la Mia Chitarra“, a song that ignites the desire to play!
Flowers from Ayako, one of Franco’s best-known pieces composed in Hiroshima in Japan, and Followers of Dulcamara with which Franco closed the concert, dedicating it to all his students and in particular to his first ten years of fingerstyle guitar workshops in Italy.
We who were listening, felt as if intoxicated by a flow of gratitude to Franco, a Sunny State of Mind, an intimate awareness of having lived a very special Saturday night. 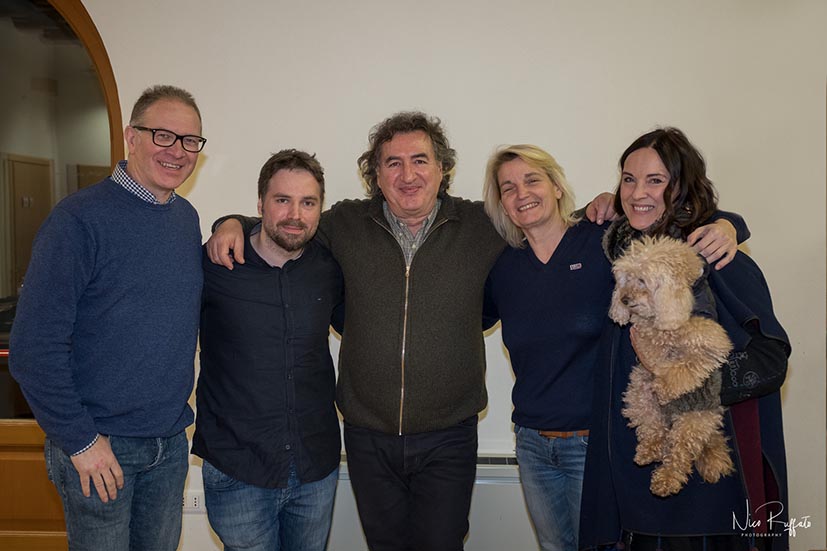 It’s a pity that in Italy moments like this are rarer and rarer and because of this reason even more valuable.
So we must applaud those who, like Michele, Nico and all the organizers of the evening, united by a strong passion for the guitar, spend energy and time to organize unforgettable evenings like this!

The following day a beautiful sunny Sunday welcomed us. The students waiting for Franco were enjoying the unexpected warmth of March when you’re already imagining the beautiful season coming and maybe, they were also wondering how the workshop that was about to begin would go.
Franco, instead of performing in a second concert, which perhaps would not have added much to that of the night before but above all, would not have had any practical effect on the educational journey of each participant, preferred to invite them to play a piece of their choice, anything, even just a part, encouraging a bit ‘all.
After an initial moment of embarrassment, little by little, the air melted and everyone felt at ease with each other and with Franco. It came out of the desire to share experiences on the guitar with everyone. So everyone received attention and advice. It was nice.

Then there was also me and Margot…. but that’s another story 🙂

Thanks to the great Nico, guitar enthusiast but also an extraordinary photographer! 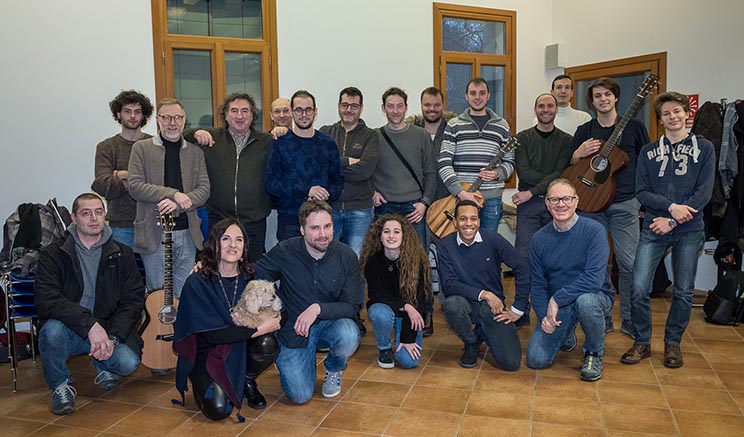 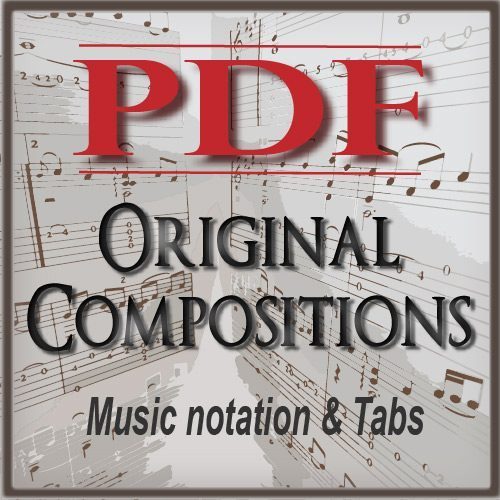 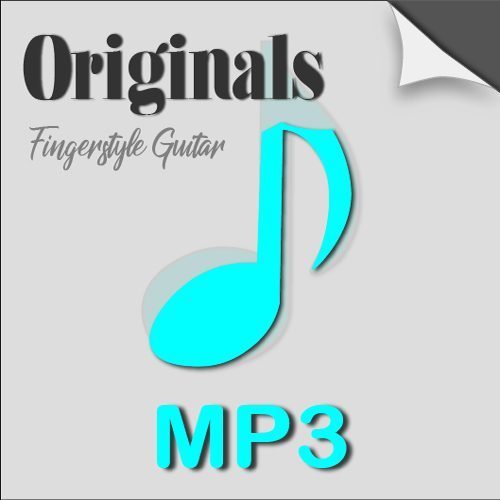 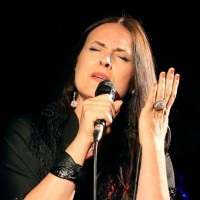